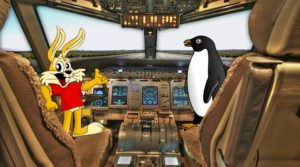 Many of our projects combine real footage along with animation characters. This picture of Perry Penguin and Ricky Rabbit in the cockpit of a 737 brought lots of attention and visitors to a small mid-west business, creating good will and increasing sales.

The great part about adding animation to real footage is it does allow your imagination to make the impossible seem possible. When was the last time you saw a penguin and a rabbit in the cockpit of an airliner?

Here is a one minute video we did for this client in the mid-west. Their business is meat processing, so instead of trying to show meat being processed, we decided to create some characters around their business. The main character, Perry Perry Penguin, was running for President, so we showed him on the campaign trail and coming back home. Again, this was a mixture of actual video footage mixed in with cartoon characters.